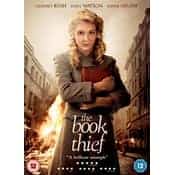 “I am an avid reader of books. For me reading is a form of escapism, I can get lost in a book and forget everything else, it is simply a wonderful way to relax. My reading choice is like my preference for music, eclectic. It’s whatever captures my interest and imagination. I will read anything, as long as it makes me want to turn the page to know more. One of my favourite books is The Book Thief by Markus Zusak. I have read it many times and it always leaves a significant impression on me. Although it is a young adult book, with the simplest of language, the ideas and emotions within it are remarkable. The story centres around the power of books and words, I would highly recommend it. A line from the book that always resonates with me is

All schools in the Trust work so hard to teach and promote reading. As educators, we all understand the benefits of reading and books. For our pupils being able to read means,

Thank you for everyone who took the time to reflect on and share their favourite book. It was a privilege to read each one. All the recommendations are below. I hope this small summary encourages even more reading and sharing. I have certainly added a few more titles to my future reading list”.

There is no such thing as a child who hates to read; there are only children who have not found the right book

We read to know we are not alone

The greatest gift is a passion for reading